Is This Why Whitmer's Covid Czar Resigned?

Probably not, but it makes you wonder.

"With COVID-19 cases surging, there is great urgency to encourage masking and social distancing," Gordon wrote in one email on Oct. 17. "These are the best tools available to slow the rise in cases, hospitalizations and deaths.

"While some people will act because they believe it is important, for others, a credible threat of sanction is likely to be critical."

These emails were sent after the Michigan Supreme Court struck down her orders as unconstitutional.

The CEO of the Michigan Sheriffs Association replied to Gordon's email, in part:

MSA believes the administrative ticketing process would be difficult to enforce both legally and from a manpower perspective, and encourages all parties to refrain from emphasizing that message [of enforcement], as it is both counterproductive and negative.


ALERT: How to Stop Mandatory Vaccinations in Michigan

House Bill 4667 (HB4667) would "prohibit producing, issuing, or providing an incentive for COVID-19 vaccination passports." This is crucial legislation, proposed by state representative Sue Allor of Wolverine, that will protect Michigan residents from vaccine mandates whether they are enforced by the private or the public sector.

"This is frightening," Allor said about the prospect of vaccine passports. "In fact, this is terrifying."

HB4667 is not the only measure that has been introduced to push back against coercive vaccine mandates. There are a slew of other bills that have been introduced to provide protections against the technocratic policies coming down the pike from the globalists.

State representative John Damoose (R-Harbor Springs) introduced House Bill 4789 (HB4789) to bar any state agency from requiring “an individual to present documentation disclosing his or her COVID-19 vaccination or immunity status to gain access to property owned by a state agency or to receive a service from the state agency.”

State representative Shri Thanedar (D-Detroit) has introduced House Bill 4790 (HB4790), showing that there is a bipartisan coalition forming to oppose coercive vaccine mandates. The bill would bar any political subdivision from requiring “an individual to present documentation disclosing his or her COVID-19 vaccination or immunity status to gain access to property owned by a political subdivision or to receive a service from the political subdivision.”

House Bill 4791 (HB4791) was introduced by Rep. Steve Carra (R-Three Rivers) to ban private employers from enforcing mandatory vaccine policies. Rep. Beau LaFave (R-Iron Mountain) introduced House Bill 4792 (HB4792), or the "COVID-19 vaccination privacy act,” to ban any “place of public accommodation” from “requiring an individual to present documentation disclosing his or her COVID-19 vaccination or immunity status to gain access to or receive a service from the place of public accommodation.”

WHAT CAN YOU DO TO SUPPORT THESE BILLS?

All of these bills are in the House Oversight Committee, which is chaired by Rep. Steve Johnson (R-Wayland). Here is the contact information from every person on Oversight:

Please let these folks know that mandatory vaccinations are not acceptable whether the mandates are enforced through the public or private sector. We need to preserve the freedom of choice. If people want to take Big Pharma’s rushed and experimental COVID-19 vaccines, that is their choice but there should not be a myriad of rules and regulations put into place to nudge people into getting the shots.

Send an email and call up these individuals on the House Oversight Committee. Tell them that they must support HB4667 as well as HB4789-4792. Let the lawmakers know that all of these bills must be preserved and passed currently as written to provide the protections that Michigan residents need from the scientific tyranny that is being pushed on us all with COVID-19 used as the pretense.

The existing scientific evidences challenge the safety and efficacy of wearing facemask as preventive intervention for COVID-19. The data suggest that both medical and non-medical facemasks are ineffective to block human-to-human transmission of viral and infectious disease such SARS-CoV-2 and COVID-19, supporting against the usage of facemasks. Wearing facemasks has been demonstrated to have substantial adverse physiological and psychological effects. These include hypoxia, hypercapnia, shortness of breath, increased acidity and toxicity, activation of fear and stress response, rise in stress hormones, immunosuppression, fatigue, headaches, decline in cognitive performance, predisposition for viral and infectious illnesses, chronic stress, anxiety and depression. Long-term consequences of wearing facemask can cause health deterioration, developing and progression of chronic diseases and premature death. Governments, policy makers and health organizations should utilize proper and scientific evidence-based approach with respect to wearing facemasks, when the latter is considered as preventive intervention for public health.

Naturally, no major media reported the study and Twitter suspended Steve Cortes for posting it.

The administration of Gov. Gretchen Whitmer is drafting permanent rules that, once adopted, would impose an indefinite mandate for employees and customers to wear face masks.

The mandate is spelled out in draft rules posted by the Michigan Occupational Safety and Health Administration, or MIOSHA. The rules, once formalized, would replace the state’s current emergency orders.

Most importantly, any rules the governor creates must be brought before the Joint Committee on Administrative Rules (JCAR) in the legislature. If the legislature declares a rule is improper, it would, at a minimum, delay the rule from taking effect for nine months.

All of them lean conservative within their caucuses and would likely do everything possible to fight the imposition of the rule.

We will monitor this situation as it develops.

Inventor of Test Used For COVID: Fauci Is A Liar With An “Agenda”

Karry Mullis, a Nobel Prize in Chemistry winner for his invention of the PCR testing technique used worldwide for COVID-19, has not been a fan of the US National Institute of Allergy and Infectious Diseases director Anthony Fauci for a long time.

In an interview that has resurfaced from the 1990s, Mullis railed against Fauci repeatedly, expressing numerous criticisms towards Anthony Fauci and his career. Mullis began by saying “he doesn’t know anything... about anything” and “doesn’t understand medicine [and] should not be in a position like he's in.” Mullis died in 2019, months before the coronavirus pandemic began.

Watch the interview with Kary Mullis at BLP.

Biden Regime Is Developing ‘Vaccine Passport’ Americans Must Have To Engage In Commerce (i.e. To Live)

After months of speculation, today The Washington Post confirmed that the Biden regime is developing a “vaccine passport” that Americans may need to present to prove they have received their COVID-19 vaccine before they will be allowed to engage in commerce in a “return to normalcy” that looks nothing like the past.

According to The Washington Post, the Biden regime “and private companies are working to develop a standard way of handling credentials — often referred to as ‘vaccine passports’ (or ‘mark of the beast’ &nmdashRM)— that would allow Americans to prove they have been vaccinated against the novel coronavirus as businesses try to reopen.” [...]

The left wing newspaper also believes that the vaccines can be used to bully skeptical Americans into taking the controversial vaccines.

“There is evidence vaccine passports could motivate skeptical Americans to get shots. Several vaccine-hesitant participants at a recent focus group of Trump voters led by pollster Frank Luntz suggested their desire to see family, go on vacation and resume other aspects of daily life outpaced fear of the shots, particularly if travel companies and others moved to require proof of vaccination,” they assert.

However, the Biden regime apparently wants this pressure to come entirely in the form of corporate interests requiring vaccines, and does not want to use the weight of the federal government to require the vaccine passports.

The Branch Covidians had a predictable melt-down when Texas announced it was ending its mask mandate and opening all businesses.

But now, three weeks on: 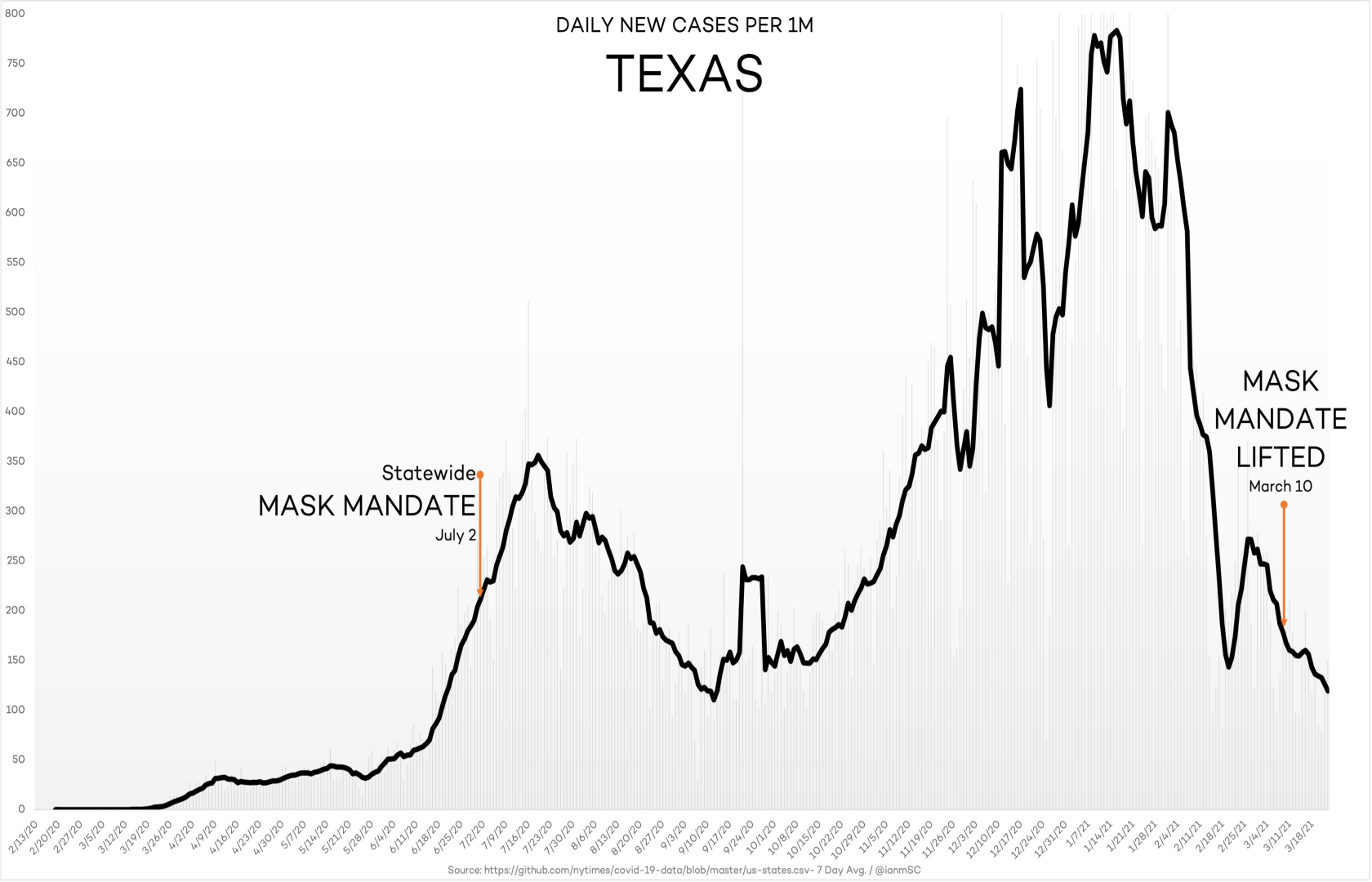 Pavlos-Hackney owns Marlena’s Bistro and Pizzeria in Holland, Mich. She was arrested Friday morning on her way to work.

“This owner has continued to willfully violate the state’s food laws, public health orders and the order of the court – a dangerous act that may have exposed dozens of diners and employees to the virus,” Attorney General Dana Nessel said.