Douglas Frank has an amazing theory. According to him, the voter turnout by voters' age in every county in Michigan is almost the same. He says the turnout curve is a sixth-order polynomial, a "key," and that it "demonstrates the activity of a regulating algorithm." 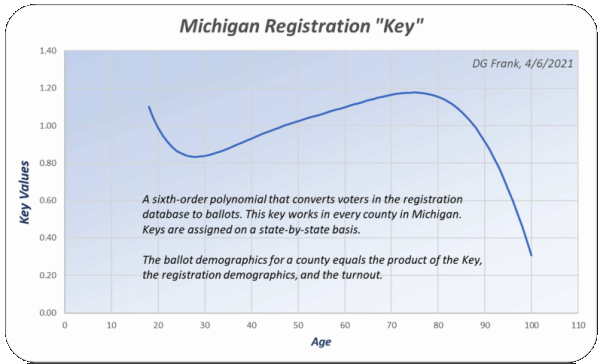 Frank's theory was used prominently in the latest filing in the Antrim County lawsuit, and Frank himself appears prominently in Mike Lindell's new movie, "Absolute Interference."

How would such a regulating algorithm work? Frank never says.

That's because there is no possible way it could work.

Frank seems to suggest it must be the Dominion machines behind the manipulation of turnout. But Dominion doesn't count turnout. No tabulating machine does.

When you show up to vote at the polls, you fill out an application to vote, and the poll book inspector checks you in and issues you a ballot. The ballot number assigned to each voter is recorded in the poll book.

When you vote by absentee ballot, your local clerk issues you a ballot and the ballot number is recorded in the poll book. When you return the ballot, the clerk receives your ballot and marks the ballot as having been received.

The tabulator machine records how you vote, but that you vote is recorded entirely by humans.

The only alternative, because machines do not count turnout, is that somehow, humans forged ballots in every county to make these numbers work.

However, this conspiracy would involve more than just the clerks of all 83 counties in Michigan. It would require poll workers and absent voter counting board officials, dozens of people in every county, to make this possible.

But why? Why would any hacker or conspiracy of election officials see to it that a perfect number of ballots were created according to a voter's age? The age of any given voter is completely irrevelant.

Think about it! If turnout by age naturally varies by some random amount, an algorithm would have to counter that variation in order for there to be near-identical turnout curves from one county to the next.

The theory makes no sense. Compared to the ordinary explanation – that turnout across voters' age wouldn't vary much from one county to the next – the theory requires an unbelievable amount of logistics and personnel, all to achieve something totally irrelevant to the desired result.

And it would absolutely impossible to do, because they would have no way of knowing who would actually turn out to vote on election day, as about 40% of Michigan voters did.

Maybe this is why Doug Frank never actually disclosed the polynomial equation he claims is the "key" to predicting the number of ballots by each age of registered voter. Nobody can double-check his findings.

Why do I bring this up? Because facts matter, and disinformation is damaging.

Theories like this give the left-wing mass media ammunition to use against us. It exposes us to attack and ridicule.

At Rescue Michigan, because we organize for election reform and our statements may be repeated by supporters, we have an ethical obligation to be rigorous in our facts and analysis. That's why we stick to the facts we can prove – that the Secretary of State illegally removed meaningful signature checks, and that poll challengers in Detroit were illegally obstructed, for example – and not repeat claims that fall apart under scrutiny, as much as our supporters might want to believe it.

And this is a standard that all leaders should aspire to.