The Lynching of Kyle Rittenhouse
by Adam de Angeli

In August 2020, riots erupted in Kenosha, Wisconsin because police had non-fatally shot a man who, in the course of kidnapping his children from their mother, reached for a knife in his car while resisting arrest for a felony warrant.

In sworn testimony last week, police admitted that they were directed to do nothing to stop the arson, looting, and malicious destruction that beseiged the city. About $50 million of property was torched; 40 buildings were destroyed and another 100 damaged.

It was amidst that environment – the town he grew up in, beseiged by anarcho-fascist terrorists – that Kyle Rittenhouse went to Kenosha to protect the innocent city.

Kyle cleaned up graffiti throughout the day, and when the violence came, Kyle protected property, extinguished fires, and administered medical aid.

It was when Kyle extinguished a fire in a dumpster — that rioters were attempting to roll into a gas station — that one rioter, a convicted child rapist named Joseph Rosenbaum, told Kyle he would kill him when he got him alone.

And at the moment Kyle became separated for his friends, Rosenbaum chased Kyle until cornering him an alley. Then he screamed at Kyle, "F--- you" and lunged for his gun.

Only once Rosenbaum's hand was on the barrel did Kyle finally press the trigger.

Kyle immediately began running for the police when the mob chased after him. That was when Anthony Huber, a lifelong criminal whose history includes beating his sister, stabbing his brother, and kidnapping another man, hit him in the shoulder with a skateboard.

Kyle continued running, stumbled, and fell. Another rioter jump-kicked him in the face, and Huber went in with his skateboard. A split second before the skateboard's steel trucks would have crashed into Kyle's skull, Kyle discharged his rifle again.

Then another rioter, Gaige Grosskreutz, approached Kyle with a loaded Glock in hand. With Grosskreutz's gun (an illegal gun: he had a prior conviction for intoxicated use of a firearm) pointed directly at Kyle, Kyle fired once more, disabling the fourth assailant's arm, and at last made his way to safety among the police.

In every moment, Kyle Rittenhouse acted with pure innocence – and extraordinary discipline. It was his innocence that led him to protect Kenosha that day. He never once pointed his rifle at anyone until the moment he needed to fire, and then, did so with expert accuracy. Not one innocent bystander was harmed.

All of this was proven on countless videos recorded on the scene, and now corroborated by every eyewitness.

Instead of being venerated for the American hero he is, Kyle has been on trial these past two weeks for murder and related charges.

In the 14 months leading up to the trial, the mass media was waged a propaganda war to demonize Kyle. Why?

To poison the jury, to rile the mob in the event of an acquittal, to scar Kyle Rittenhouse for life, and to gin up civil war among the American people.

The campaign of endless lies was effective. Lies about Kyle flew across the Internet for the past year.

"The gun was illegal." False.
"Kyle took the gun across state lines." False.
"His mom should be in jail for driving him there." She didn't.
"Kyle had no connection to Kenosha." His dad lives there.

Fair-minded liberals on Twitter were surprised to learn the assailants were white, not black.

The lies about Kyle are shocking, and seemingly endless.

What's all of this really about?

It's the right to resist being lynched. 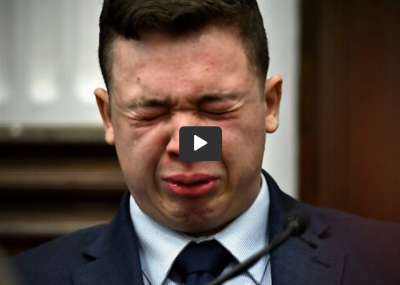 Watch: The Lynching of Kyle of Rittenhouse


Lynchings are something worse than murders. Participants boasted of them. The goal was to terrorize black Americans into total submission.

That is what the radical Left wants most of all.

He stopped them, so they want him dead now more than ever.

This is a good time, right now, to take stock of how the "right wing" media, supposedly on our side, is covering the case.

After saying almost nothing for a year, Kyle had a few good days in court (his own testimony was extremely brave, and compelling), and only then, once it looked like Kyle would be acquitted, did they begin speaking up.

Problem is, conservative media is still media: they don't get the full story and don't know what they're talking about.

Kyle's defense team have made errors of shocking magnitude. See the video above for the details.

I pray for Kyle's acquittal, or that the judge throws out the case.

But if, God forbid, Kyle is convicted, watch what conservative media does.

See who stands up and rages against this injustice. See who continues to trumpet "Free Kyle!"

And see who moves on and pretends it all never happened.

See if the NRA says anything about the right to self-defense being murdered by the mob.

See if the Federalist Society says anything about this perversion of justice.

See if your "law and order" Republicans speak out, or turn away in shame.

And realize what every patriot must do: speak out, and fight back.

The America we love is almost gone. Every day brings a new travesty.

Our country is controlled by sociopaths. This is no exaggeration.

If we aren't fighting with every spare moment to save our country, we're going to lose it.